When one door closes, another shutter opens

A few weeks back, my older daughter and I traveled to Niagara Falls.

My son was at a music event, and my wife and younger daughter had gone to see a concert.

I wanted to make a picture of the falls flowing with a slow shutter, which blurs the water into a creamy exposure, while keeping all other details sharp an in focus.

So we parked the car, and I grabbed my camera bag and tripod and away we went. Everything should work out nicely, right? Wrong!

Apparently the one thing I hadn’t counted on; I wasn’t the only person who scheduled a visit to this natural wonder of the world on this Saturday night. And, to make matters worse, there was a fair amount of construction taking place at the park, which limited the viewing areas. This meant that the hundreds and hundreds of people were funneled into a smaller area. This left me with absolutely no chance to set-up my tripod, and very little chance to even get close enough to get a handheld picture of the majesty of the Falls.

My daughter and I stood 3-4 people back from the rail for about 20 minutes, and watched what we could, before making our way back up the park walkway along the rapids.

At first I was a bit disappointed. We don’t live too far from the Falls, and I work even closer, but trying to schedule a trip there to get the photo always seems to take some work. This was a beautiful night, and the sadly the photo wasn’t possible.

As my daughter and I were walking, we stopped to look at the rapids, which are actually a site to see in its own right. There is a sheer power to Niagara Falls which takes root in the rapids a few hundred feet before the final drop into the Niagara Gorge.

As I looked up the river, I saw the bridge that crosses over to Goat Island. This brick structure is an understated piece of architecture, standing strong over the rapids below.

“Time to get the camera out,” I thought to myself. 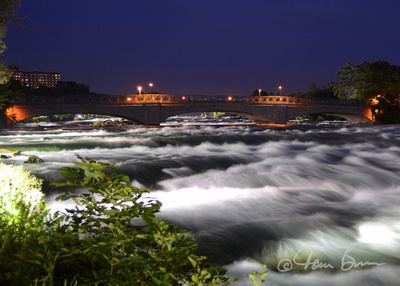 I set-up, fiddled with the settings and took a few night shots of the Goat Island bridge. In the group of photos there are some nice shots. I was able to capture the bridge structure, while still getting the powerful movement of the water.

After reviewing the pictures there are a couple of things I will try the next time I head to the Falls, because I will try to reshoot the rapids shot again.

Despite that, I did also learn that although my planned photo couldn’t really happen that night, there was another opportunity right in front of my eyes.

I learned that when shooting a country road when I found “Peak-a-Moo,” and I learned it again with the rapids.

Just goes to show you, there’s a picture out there somewhere. You just have to look around to find it.