Last year I became the race photographer for Eclipse Multi Sport. There were a number of convergent steps leading to this partnership, and my foray into the world of professional photography. I will share that story another time. Today’s just a quick look back at the finish line, and the fun little adventure this has been.

I’ve shot about ten races in the past two years, including triathlons, mud runs, 5Ks and half-marathons, which means I’ve taken close to 50,000 race and finish line photos. 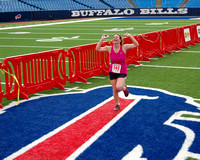 I like being at the finish line of races. As a runner myself, I know there are an infinite number of stories inside each race, and many times those stories are evident when the participants approach the finish line. It can be a very inspiring experience to watch a person cross a finish line. The race course is always measured, but you never know the personal distance any individual has traveled to get to that finish line.

Race photography is not like some of the other photos I make. When I go to shoot a building, a landscape, or even a portrait, there is set-up time, adjustments, composition and other details in the shoot. I might take twenty variations of a picture in an hour or so.

When I shoot a race it is much more of a frantic pace. It is not uncommon for me to come home with 4-5,000 photos, which I process (slightly) and upload to my web site in hopes for sales from the participants.

As an aside, people wonder if I make a lot of money shooting races, and sadly the answer is no. While some of the races are better than others, there are some races that I make very little. In fact, for one race, I drove over 90 miles (round trip) total, took pictures for four hours, processed the files for another six hours, and uploaded the files to my web site. From all of that, I’ve made $28 in sales, of which I will split with another photographer, and donate a portion back to the race charity. So, no, it’s not about the money.

Now… the photography. It’s not always easy to get a great photo, a piece of art, at a finish line. In fact, many, many times I take pictures that I really don’t even see in the viewfinder. I shot a race in the fall of 2012 in which a number of friends told me they were running. I only saw about half of them at the finish line, but I did see the other half when I processed the pictures. So they were there, but in the pace of the finish, I was focused (no pun intended) on capturing the masses of people crossing the line, and didn’t really see many “individuals.” 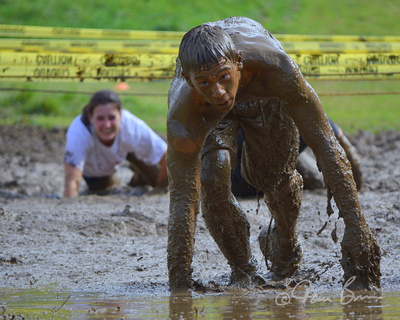 Now, even with the crazy pace of shooting, there are photos that do stick with me. There are moments with expressions of emotion at the finish line, joy on the faces of the participants, the uniqueness of an image, strange behavior, photos that capture the experience of the day, and yes, sometimes the photo has an artistic quality to it.

Last week I shot the Muddy Viking near Lake Chautauqua, and there were at least two unique moments that stuck with me. One is of a gentleman climbing out of the mud pit, completely, and I mean completely, covered in mud. I knew as I was taking this picture that it would be an interesting shot.

The other moment is actually a series of shots. As part of the race there was a kids run, complete with the mud pit.

Many people, young and old, take different approaches to the mud pit at these races. Some avoid the mud, and try to get as little on them as possible. Others embrace the mud, jump in, roll around, and maybe even tackle others in the pit.

Well two girls, about five years old each, embraced the mud. They climbed in with their dirty blond locks, and crawled through the pit, savoring each movement. And then one of the young ladies looked quizzically at the mud, and then dipped her chin in, only to make the moment more memorable. 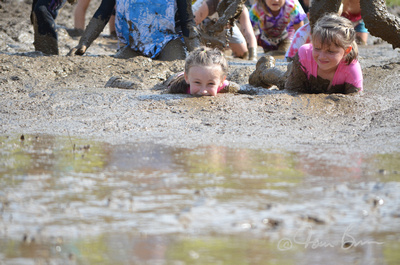 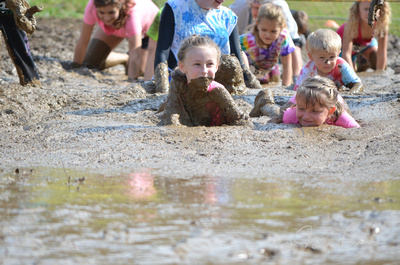 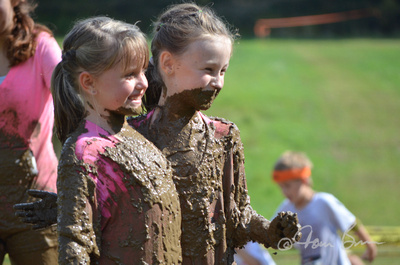 Jim Croce lamented about saving time in a bottle, and I’m sure many of us have had similar thoughts throughout our lives. And while you cannot save time, you can capture moments. Not quite the same, but worthwhile none the less. I make photos, you know…take pictures. Capture moments.

I do not always know the people I am photographing at each race, but I am glad to capture the moments, and sometimes even a nice photograph.

And I know that some of the participants appreciate the work too. In fact, one of the participants, Sandy Lloyd, recently posted to my message board, “Thanks for doing such a great job photographing the Muddy Viking 2013! I could spend hours going through these and laughing! What great memories!”

Thanks, Sandy. My pleasure!