My phone rang and it was my wife. I was at work just a little bit late last Friday afternoon, and I thought she was wondering what time I would be home.

“Are you ready for this?” she started.

I don’t know if I responded, but she continued.

“Katie just called and she wants to know if you can come over at 6:15…”

Katie is a friend of ours. Her son and our son have been close friends since kindergarten, and I’ve actually known her and her husband Jim since college, when Jim and I worked together at the local Kmart.

“…come over at 6:15 because Amy is getting engaged, and it’s a surprise and she wants you to take pictures.”

Ok. Sounds like it could be fun. As I was driving home I thought of a bunch of photography type things, like how will the light be, flash or no flash, where will this happen, inside or out, where can I hide so as to not spoil a surprise.

Then I thought about this…have I ever seen someone get engaged? I don’t mean on the video board at a Bisons game, or anything like that. I mean live, up close, someone I know, and to see their honest reaction. Other than seeing my girlfriend (now wife), I don’t know that I have seen anyone get engaged. Now I was thinking about that.

I got home, changed my clothes, grabbed my camera bag, and was ready to go, and my wife asked me to wait a minute. She wanted to come along.

Here’s where it got a little tricky. When we pulled up, Amy was already on the front porch. I felt a lump in my throat, and thought one of two things. One, we’re late. Two, it’s not happening. As it turns out, my wife had gotten the message wrong. The plan wasn’t for Amy, but rather her sister Meghan. Phew.

As we walked up, Amy, Kate and friends were arranging a line of pumpkins on the railing of the front porch. Each of the pumpkins had a letter carved in it to spell out M-A-R-R-Y  M-E? Cute idea.

Now I started to think about where I would stand to get her reaction as she read the pumpkins. Which way would they be coming? And about the light, or darkness as the sun was quickly setting.  I made the adjustments on my camera to be able to use the available light.

To fast forward ahead a bit, I was hiding behind a car when they pulled up and parked. I really couldn’t see where they were in the process of nearing the porch, or what was happening, and could only hear them speaking faintly. I switched positions as he was still asking her. And this I know is true from the original phone conversation with my wife, yes it was a surprise. 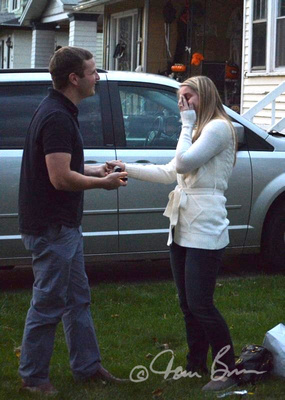 He was now standing with the ring (he had already knelt), and she had a bewildered look of surprise and joy on her face. I was able to capture a few pictures of her as she finally got past the shock of it all and said yes. And the celebration began.

Once the surprise was over I was able to turn on my flash and not spoil the moment. I continued to take candid photos before the couple moved in front of the pumpkins for some posed shots.

Jim brought out some champagne and toasted the newly engaged couple. I took a few more pictures, some candid’s, some of the ring, etc.

It was fun to see that joy and excitement in the faces of Meghan and Clark and their families, who were all there. It’s such an exciting time for them, and I hope they savor every minute. And it was great to be able to capture that moment for our friends.

And then I thought of this. Twenty one years ago I knelt down and asked my girlfriend to marry me. No pumpkins, no one else around. And honestly, she didn’t even want to go to the spot where I wanted to propose. It was a cold and rainy July day and she didn’t want to get out of the car. But she did, and she said yes.

Tomorrow my wife I will celebrate our twentieth wedding anniversary.  It has been a wonderful journey with more ups than downs, more laughs than frowns, and more joy than I could ever imagine.

Congratulations Clark and Meghan! May you have at least half of the happiness I have had.