August 27, 2013  •  8 Comments
What do you do with a picture of a cow staring at you through the brush?
That’s an odd question, and frankly one I never thought I would ever ask myself, or you for that matter. But now that question looms for me.
I have been commissioned to take a photo for a book of short stories, and the author has a vision of a country road. There are other particulars, but I won’t get into those here. 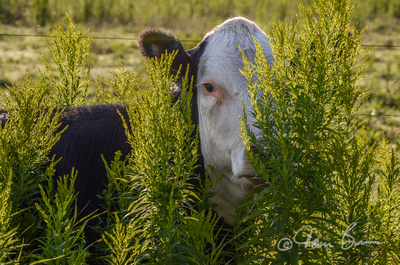 Last weekend my wife and I got up bright and early…actually it was so early it was still dark, so we got up dark and early, and headed to Ellicottville to get a picture of a country road. I had a certain road in mind, and it turns out that it was probably the right location.
I was getting dozens of different shots for the author to review from different spots on this three mile stretch of road. I shot from on top of a ladder, down along the road, from the middle of the street, off to the side, etc. Plenty to choose from.
I paused for a bit, and was putting the ladder back into the car to head to a different location when I looked up. Off in the distance I saw something walking into the road. “What was that,” I thought to myself. It was too big to be a dog. Knowing I need to get new glasses I needed to get closer to find out what it was. Just then a second all-black creature walked into the road, followed by a nearly all-black creature with a white head. They were cows. Cows just strolling into the road.
Now on the opposite side of the road from where the cows came, there was a herd of cows in a large, fenced in area. A couple had been mooing at me while I was taking pictures, but I didn’t pay any attention to the farm animals.
The loose cows walked over to the farm fence, and were met there by a couple of cows from inside the area. I wondered if the fenced in cows were thinking, “hey, how’d you get out there?”
While the vagrants were walking along the outside of the fence, we pulled the car up to the area. Camera in hand I snapped a few quick shots. The cows continued to make their way down the road, even jogging at times. It was a strange site to see.
After shooting some more road shots, I took some wild flower pictures, and captured a few other pics as well. When I was reviewing my portfolio from the day I was struck by the close-up of the one cow, which has now become known as “Peek-a-Moo” because of the way the cow is peeking out from behind some tall grass.
Technically I like the photo because of the strong back light that illuminates the cow and grass, as the “look” coming from the giant creature through the grass. So I took my own advice from last week and ordered “Peek-a-Moo.” And I ordered enlargements. I even talked about ordering it as a large canvas wrap piece of artwork. My wife thoroughly enjoyed the experience that morning, but I don’t think she took too kindly to the idea of having a two or three foot cow head on one of our walls.
So in a few days “Peek-a-Moo” will be here, along with a few dozen other prints I ordered from this summer’s activities. I will mat and frame the 11x14 print (I ordered an 8x10 too if anyone is interested), and then I will have to find a spot for it.
And this print will forever remind me of one of my photography credos, and that is that there is a picture happening somewhere, even when you’re taking a picture of something else.
Keywords: Cow, Ellicottville, Morning, Western New York