Saturday Artisans Market: I'll be back

I haven’t posted in a while. Well, ok, quite a while.

For that reason, today’s post will ramble a bit.

Last summer I wrote an entry about visiting the Canalside area of Buffalo, NY, a newly developed recreation space along part of Buffalo’s inner harbor. The space hosts any number of events during the summer season, including concerts, group exercise events, races, etc. The space is adorned with Adirondack chairs and it is quite active and picturesque.

The area opened a few of years ago, and one night, while out taking pictures, I stopped by to capture some of Canalside. I made subsequent trips over the next couple of weeks that year to capture some more of this area. I think I captured photos on three separate nights. 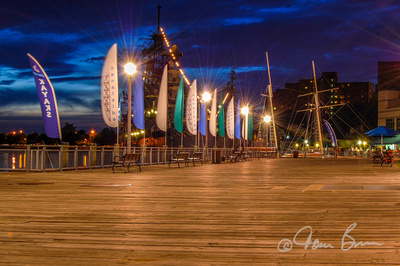 This really can be a picturesque area, and I like many of the photos I made while down there, but two in particular, stand out to me.

The first one, which I call Flags of the Future (I don’t usually name my photos), I liked from the minute I saw it in my camera and on my computer. It captures the boardwalk area of the Canalside, along with the iconic flags that fly along the water’s edge. From a “photographic rules” standpoint, there are one or two things that may not be correct, but the strong content of the image outweighs these rules.

This image was hanging on a wall, along with a few more of my prints, in a local restaurant, that is until someone bought it right off the wall. Thank you very much. At the time, one of the waitresses told me they had only sold two prints off the walls at the restaurant, and one was mine. (I recently sold another one there too…so that’s good).

The second Canalside image that stands out is more like a fine wine for me. This photo has gotten better with age. When I reviewed all the images I made on those evenings, I don’t know that I really noticed this one. However, in reviewing my archive recently, something about it jumped out at me. The one thing I like about it is that I keep seeing new things in the photo...bikes, people, City Hall, etc. 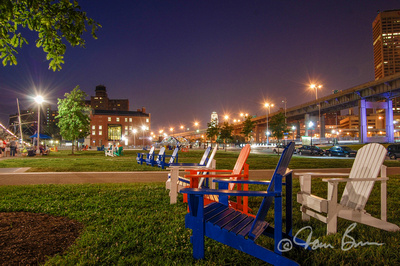 Flash forward…a few friends have encouraged me to participate in some of the local art fairs and to sell my photos. I have participated in some very small events like this, but nothing mid-size or major. This encouragement did prompt me to apply for entry to the local Saturday Artisans Market (SAM), to which I was accepted. These are a series of events, and I am only participating in three during this summer, and the first one was last Saturday.

There is a lot of work that goes into preparing for these events. You have to have a tent, weights/anchors for the tent, a way to display your work, tables, signs, etc. I did plenty of research in preparing for the event, and I still have a lot to learn, but it is a growing process.

Now one of the great things about SAM is that it is held at Canalside. And maybe it’s fate, but my tent was probably within 50 feet of the two spots that I made the two Canalside photos I spoke of earlier. I had fun talking to the people about all of my prints. Most of my work is from the Buffalo area, but many people still ask where certain photos were taken. When they would pick up one of the Canalside photos, I would ask them, “do you know where that was taken?” They would look up and around with a smile, just to confirm that is was almost in the exact spot they were standing.

It was pretty busy throughout the day. Hundreds of people had come to Canalside, whether they knew the art event was happening or not. I saw some good friends, and a couple of other friends walked by my booth 3-4 times without even seeing me. I enjoyed talking with everyone who stopped in, and I occasionally reminded them that the photos were for sale. I also had a nice conversation with Tom Dee, who oversees the group that manages the Canalside area. He was very complimentary of the photos, and I think they are going to use the images in some of their promotional presentations.

So, I told you this one would ramble a little bit.

It’s a long way to tell you that I will be at SAM again on July 5 and August 9.