Failure is not an option

As a photographer I like to look through photos from other photographers and particularly at photos similar in theme to mine. So I generally like to look at sports/event photos and photos of buildings, landmarks and landscapes.

Seeing these pictures I generally have one of three reactions.

1- There’s nothing great about that. Mine are better than that.

2- That’s good, and I have pictures that look just like that.

3- Wow! Why am I even taking pictures? Mine will never look like that.

I have these feelings probably equally, but number three tends to have a stronger effect on me than the others.

This past weekend I went out both Saturday and Sunday and took some pictures.

On Saturday the Buffalo Lighthouse was open to the public for tours, and my daughter and I went to see it. We waited in line for two hours, and while it was neat to go inside, and I had my camera, it wasn’t a real opportune time to get photos. I took a couple of pictures, but not much more than that. Then we traveled to Orchard Park to see the Eternal Flame in Chestnut Ridge Park. This flame, which is fed by natural gas seeping through the earth’s surface, sits behind a waterfall. A friend had told me she had never seen it, so her kids and my daughters hiked down to see the natural wonder. A good number of people came and went, so again, it was not an opportune time to get photos, but I got a couple and moved on for the day.

Sunday morning was beautiful in Western New York, and I left the house fairly early to look for a couple of photo opportunities. The first one was a no-go (I’ll explain later). The next couple were ok, and then I went to the Canalside area of Buffalo. I have been down there a number of times, but Sunday was just about perfect. I was there for about 30 minutes, and I for the most part I was the only one there. There was one worker cleaning, and another person passed through, but that was it. I walked around and looked for photo opportunities. I found a few, and traveled back home.

And on Sunday afternoon my son’s new band was playing at a music fest in West Seneca. We went to see him play, and I brought along my camera to document the “concert”.

Before I continue on about that event, I will go back to the third reaction I stated above. When I see absolutely beautiful photos I get a bit intimidated. I think who am I to think I can take beautiful photos? My equipment is nice, but not professional. I have stood at events next to real, professional photographers, with my consumer level equipment, and tried to look the part. And my pictures have been nice, but part of me wonders ‘should I even be there?’

I saw a quote on Facebook on Sunday from Robert Schuller that said, “What would you attempt to do if you knew you wouldn’t fail.” I don’t think “inspirational” quotes ever really inspire people to action, but they do tend to be thought provoking, and this one stuck with me.

So we picked my son up from work. We had his guitar and a change of clothes. He jumped in the car and said “There’s been a change of plans.” 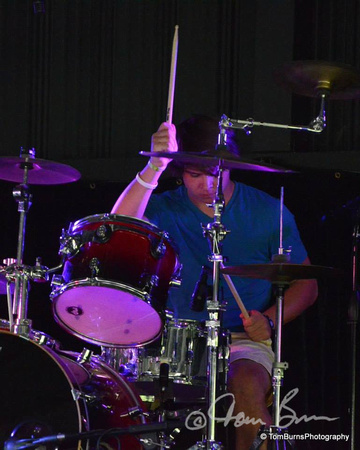 I was a bit frustrated for him, and a bit upset. I reminded him that he’s not a drummer, and that they had to take this stuff seriously. They needed a better plan.

Now my son really isn’t a drummer. He doesn’t have a drum kit. He’s never taken lessons. He’s not a drummer.

Because it was a music fest, they had a kit set-up for all the bands to ease the changeover between sets. So with other bands there, and other drummers, he climbed up behind the kit. They did a brief sound check, and he counted out the first song by banging the drumsticks together, and the song began.

And to my surprise he was good.  Now, I’m not a drummer. There may have been some technical mistakes, and things he missed, but not that I could hear. He was good. They were good. He was a drummer.

“What would you attempt to do if you knew you wouldn’t fail.”

And honestly, I don’t often take too many bad pictures. I just need to celebrate my points #1 and #2 more often.

So, in the words of the rhymin' Paul Simon, "I got a Nikon camera. I love to take a photograph..."

Or better yet, from CSN, "Teach your parents well..."